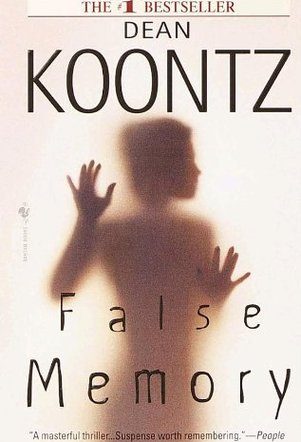 A roller coaster of the best kind!

I slightly feel like I am cheating on Stephen King. Funny statement I know but when I want my horror or creepy that is my go-to author. False Memory was recommended to me by my PT of all people. She kept talking about this book and telling me about it and it sparked my curiosity enough to want to read it. It took her a week to find the title and took me about a week to read it. My sister says big books are simply for door stoppers I say they are an onion you have to peel back layer by layer. This story is different in the sense that I do not typically pick up books that deal with mind control because of my degree in psychology I think I will over think the story but this one I loved. Martine “Martie” Rhodes, a video-game designer, has developed a rare mental disorder: autophobia, fear of oneself. Meanwhile, her husband Dusty’s young half-brother, Skeet Caulfield, has decided to jump off the roof of a building the two men are repairing—because Skeet has seen the Angel of the next world. Then you meet more friends like Susan who is suffering from the same fear. I loved how everyone is seamlessly connected to the bigger picture and I love how the villain thinks he is smarter than he is. I don’t really want to give away too much of the story just know that your biggest fears are often used against you in the most interesting of ways. I know that many people in skimming other reviews have said that this is a slow start but it is for sure worth the time. I have read a few of Dean Koontz’s new books this makes me want to read more of his older works. Do not let the size of it scare you